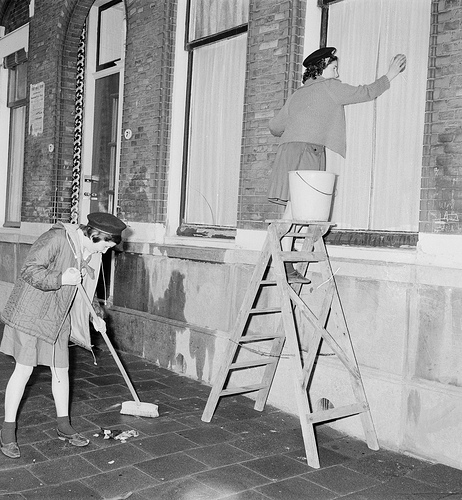 Two people are having a conversation in the tram. Suddenly, they have an unsuspected eavesdropper: me. They ranted away about the conditions inside the tram, how dirty it is, how smelly and how slow it goes along.

Then they remembered their days in Germany. How civilized the people are, how clean the urban transportation and how when they felt like throwing a ticket on the floor they felt shame. The firm action of the police and the steep fine also played their important part.

Sadly, the conversation got stuck here.

What can we learn from this? Is there a way to persuade people into being civilized… or more civilized?

As in their case, the number of civilized Germans around made them wanting to feel integrated. Throwing garbage on the sidewalk would had transform them into an opposite team, a pariah, someone who does not fit somewhere, at a particular time.

Robert Cialdini explains the benefits of creating the impression that the desired change is actually the norm, while the people who are acting against the norm are the slow movers, the unadapted. Even if this isn’t always the case, leaving the impression that the change is already here can influence others to join the crowd. In our particular case, the crowd of people who are throwing garbage in the bin.

I our particular case, being socially constrained was backed by the high price of the ticket for littering.

To wrap it all up, it is important to know and promote the values that we would like to see around us. Even if the opposite might still be the norm, it is important to create the impression that this is an isolated case. For the brave ones, praising someone who acted according to the standards we would like to have only encourages them to do so again and again. Thirdly, applied financially punishments would reach the ones that still are defying our need to live in a civilized and modern country.

Leave a Reply (name and email are optional, not required) Cancel reply